“The Cane Mutiny” or “Sit Still and Be Quiet!” 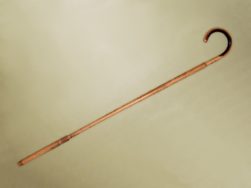 As I settled into my new role as pastor, I noticed a steady stream of new faces in attendance on Sunday mornings. One family group that stands out in my memory is of a little lady I will call Emma.  She walked slowly and bent over from years of spinal issues that required the use of a long black cane that she nurtured, much as a soldier nurtures his rifle.  One thing is certain, she wasn’t afraid to use it to keep her great grandchildren in line.  Jack was eleven years old and his sister Jean, was eight.  These poor kids had a hard life and it was only the love of their great grandma that gave them any sense of security.  Grandma Emma would look after them as best she could and see that they attended church with her every Sunday.  Their parents were into drugs and alcohol so the children were left mostly to their own devices.  Poor Jack was diagnosed with ADHD but I suspected that his attention deficit was more related to a lack of attention from his parents rather than any disorder.  Fortunately, or unfortunately, the parents seized any opportunity to have the kids out of their life.  If that meant church with grandma, then that was fine with them.  Jack was prescribed Ritalin for his condition and his parents would withhold it from him until he got home from church so they would better be able to deal with him.  That was all fine accept that Jack was usually totally wired from sugared cereal before coming to church and found it very difficult to sit still for any period of time.  Emma would allow him to sit in an empty pew right in front of her under constant threat from her trusted weapon of choice for child control.  Now, I don’t want to leave the impression that she would actually use it on him as it was more of an implied threat.  One thing is certain, Emma was hard of hearing.  The entire church would hear her “whisper” to Jack, “sit still and be quiet!” at least once a minute.  One morning she had had enough and whacked the wooden pew right beside Jack’s head to get his attention.  The resounding noise could be heard outside the church such that the neighbors thought someone had discharged a firearm inside.  No, it was just Emma discharging her cane.

After church that morning I asked her if she would allow me to try to handle Jack the next Sunday.  She readily agreed and wished me “good luck”.  The next Sunday when Jack came in I asked him if he would do me a favor and lie down on the front pew and color while I was preaching.  I wanted him to draw and color what he was hearing or whatever was on his mind.  He looked at me suspiciously but I assured him that I wouldn’t scold him for doing what I asked.  I remember saying something to him like, “Jack, that front pew has not been sat in for many years.  I want you to own it.  It will be yours for as long as you come to this church.  No one can sit there unless you say it is OK.”  His eyes were as big as saucers and he said, “Do you really mean it? Is it all mine?”  “It is all yours Jack. I mean it”.

From that point forward, Jack would proudly sit in his pew and own it.  He would draw, or color or just lay there and apparently daydream, but the behavior issues vanished almost immediately.  No more, “Sit Still and Be Quiet” was heard in the sanctuary.  Relief was felt by all, but mostly by Jack.  Almost every Sunday he would ask me a question about something I had said during the sermon.  I was careful to answer his questions directly but did not press him.  Then, one Sunday morning, it happened.  Our church had an invitation time to pray with the pastor or make a public profession of faith in Jesus Christ.  Jack got out of the front pew and in just three quick steps was standing before me saying, “I prayed that prayer with you this morning pastor.  I want Jesus to be my savior and to be baptized.”  I looked up to see his great grandma Emma, wiping away the tears from her eyes.  I had a few of my own as well.  That was one of my favorite Sundays ever.  I will never forget it.

Jack continued to grow in faith and maturity and became a positive role model for other troubled children who would be attending church in the future.  He would invite them to sit with him on his very own pew and do whatever they wanted.  Our God is an awesome God!